A few years ago my friend Shelley made Kosovo Dinner for us and told me the story about how her Dad had come up with the recipe. Since then I've cooked it several times and it always turns out well, It's super tasty, inexpensive, quick, and can be changed to suit your tastes. I asked her to share this recipe and her Dad's story on my blog:

Once upon a time, my dad worked as a U.N. Peacekeeper. He lived and worked in a small town on the side of a mountain in Kosovo for two years. He ate most of his meals at the German chow hall; braving the local taverns when he felt lucky. Eventually, he would tire of schnitzel and Turkish coffee. Finding food to cook during warm months wasn't too difficult. However, winter months (and, living on the side of a mountain in Kosovo meant that there are LOTS of winter months) proved to be a bit more challenging. Due to a lack of other options, he threw what fresh vegetables were available to him in a pan, added some local sausage and doused the whole concoction with Texas Pete. After returning home, dad made what we now call "Kosovo Dinner." It's simple, inexpensive, and freaking delicious. I wish I had pictures of a prepared Kosovo Dinner. Instead, I'll include pictures of dad in full U.N. garb. Below is my recipe for Kosovo dinner. I've made it for friends quite a few times and had to write down a recipe. Again... it's super easy. It's pretty much impossible to mess up.

Kosovo Dinner:1 package beef kielbasa, cut in to 1" pieces (or less, it's really a matter of personal preference)1 medium head of cabbage, largely cubed (or if you're lazy feel free to buy a few bags of sliced cabbage)4 carrots, cubed5-7 medium red potatoes, cubed1 white onion, finely dicedolive oilblack pepperTexas Pete1. Lightly coat the bottom of a LARGE skillet or pan with olive oil. Throw in the kielbasa and cook on medium/medium-low heat until both sides of the sausage are browned. Spoon sausage in to a bowl lined with a paper towel, keep oil in pan.2. Add onions to pan, cook until they are translucent. Spoon onions in to a bowl lined with a paper towel to drain excess oil. Drain remaining oil from pan, lightly wipe out the pan but feel free to leave a little oil for flavoring.3. Reheat pan to medium low. Throw EVERYTHING in the pan. You may have to add a little water in order to let the cabbage steam. Add black pepper to taste. Toss everything together then cover the pan with a lid.4. Cook for 20-30 minutes (maybe more) or until the cabbage and potatoes are cooked to your preferred consistency.5. EAT IT! I recommend using Texas Pete with this dish.

Reposted courtesy of Shelley at Shelley Sees Seoul with special thanks to Mark Palmer.

Feel free to season to taste with garlic, season salt, etc. You can also sub the potatoes for cauliflower to reduce the carbs or use chicken stock instead of water for extra flavor!
Labels: cabbage carrots cheap recipes dinner garlic potatoes quick recipes recipes sausage vegetables 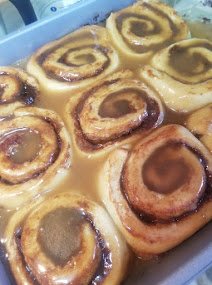 Cari
I like to cook and bake, and I'm great at it, but I'm chronically ill, which means sometimes I just don't have the spoons, literally or figuratively. I'm either fatigued, or I threw them all in the sink after a single stir. I've been with my partner, James, since 2012. We have 2 dogs and 2 cats and a lot of houseplants.